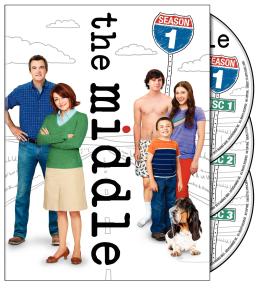 I know in the past week or two I have really made some progress getting stuff done and that has included doing some catch-ups for the fall season.

Tuesday, The Middle and The Vampire Diaries release their complete first seasons, and they both have one thing in common for me, they were both shows I had no interest going in to last year and by May, loved them.

The Middle is a more traditional family comedy than its hyped network companion Modern Family, but that tradition presents the love and quality you loved in the 1990s. Patricia Heaton and her whole family gel and move with problems beautifully and you would be very wise to add this DVD with features that focus on the lovely Sue and the troubled journey it took to get this to series.

The Vampire Diaries took a more tricky journal in my fall season last year. I watched the pilot the previous summer and despised every minute of it and even though I should I have listen to my better judgement gave it three more episodes to get better, than three more, then by December, I found myself remembering and liking what was happening. The series grew of a big cliché into something, compelling, fascinating, with strong personalities and good-looking ones at that. All 22 episodes are in the set along with lengthy features on many aspects of production, gag reels, webisodes, commentary, plus as a bonus an audiobook of one of the novels it is based by L.J Smith.

Another Tuesday, another reason to catch-up on fall TV!