DVD Pick of the Week: BBC’s How the Earth Changed History 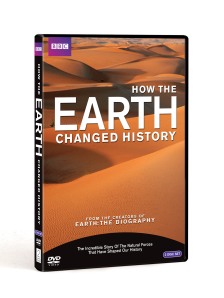 It was not that long ago that I said you must have BBC’s Life, that aired on Discovery here in the USA on DVD. Well, they did it again and rather quickly and once again partnering with WB, they are releasing a new special, How the Earth Changed History.

History, hosted by Ian Stewart, tells us through geography, weather, rocks, and more how are Earth has influenced each civilization that has come to inhabit the planet.

I had a change to watch the 300-minute feature and it is incredibly interesting. The difference with this BBC presentation is that is relies mostly on the information rather than the look (which is still great especially on HD or Blu-Ray), which I liked as a change of pace.

How the Earth Changed History is available today for you to own on both DVD and Blu- Ray, plus also own it bbcamericashop.com